It is a great honor for me to join you today and to speak to you on behalf of UNITAD, the United Nations Investigative Team that is supporting the investigation of crimes committed by Da’esh in Iraq, including the Camp Speicher massacre.

Exactly seven years ago, in this place, some of the most heinous, inhumane crimes one can imagine were committed.  Each one you lost a loved one, a son, husband, father, uncle, nephew, son-in-law because of these crimes. I wish to extend to you on behalf of the Team, and in particular the Head of our Team, Mr. Karim Asad Ahmad Khan QC, my most sincere condolences for your great loss. The pain and suffering you have endured, and that you continue live every day, is beyond imaginable. It is essential that these crimes are not forgotten.

In my role at UNITAD, I am leading the Team responsible for investigating the crimes of ISIL at Camp Speicher.  I am also joined by other members of our Team here today in order to pay our respect to the victims and underline our commitment to continue to work with you to deliver meaningful justice.

The mandate of our Team, the range of crimes that we investigate, reflects the horrific scale of ISIL’s crimes and the depth of suffering they imposed on Iraq.  Specifically, our Team is tasked with collecting evidence that demonstrates these crimes were not only acts of terrorism, but were targeted attacks on the communities and people of Iraq, constituting war crimes, crimes against humanity and genocide. These are recognized as the gravest possible crimes under international law.

The evidence we have collected can then be used in national proceedings in order to bring forward trials against those responsible and recognise the gravity of the crimes inflicted on your communities.   In partnership with Iraqi authorities, we hope to deliver on our objective to assist in holding the perpetrators accountable for the crimes they have committed.

In his most recent address to the United Nations Security Council, just three weeks ago, Special Adviser Karim Khan announced the initial findings of our Team in relation to the Camp Speicher massacre.

Specifically, Special Adviser Khan noted that there was clear and convincing evidence that the massacres at Camp Speicher constituted a number of war crimes under international law. Special Adviser Khan also announced that evidence collected by the Team had demonstrated that ISIL, through its propaganda, sought to incite genocide against Shia Muslims in Iraq.

These are important recognitions of your suffering, but our investigations are ongoing, and with the new evidence currently being analysed we believe that other very serious crimes under international law may well be found.

In addition to Camp Speicher, we are also investigating ISIL crimes against the civilian population in the area of Tikrit. If you have evidence about Camp Speicher or other crimes in Tikrit that you would like to share with us, please feel free to contact us today or later by calling or through an online form called Shuhud. The evidence could be for example photos, videos or your personal observations of the crimes. All this information will help us in the investigation and eventually in bringing justice.  I have made available materials [location] that you can take with you.

I wish to warmly thank the Chairman, Executive Director and other personnel of the Committee to Commemorate the Tikrit massacre and other organizers for organizing this memorable event and for inviting us to participate. This day, every year until now and every year to come, is an occasion for you, the families of the victims to mourn your loved ones but also for the wider community to remember the sacrifice they made. It should never be forgotten. While your wounds may not be healed, I hope this day brings you some comfort.

I would wish to conclude today by providing you with a message from the Special Adviser, Mr. Karim Khan: “Today I join with the mothers, fathers, brothers and sisters that mourn the loss of their loved ones at Camp Speicher.   Please know that in your mourning, and in seeking justice, you are not alone.  In establishing UNITAD to investigative these crimes, the international community has sought to recognize the breadth and depth of your suffering.  I pray that through our work, by walking with you side-by-side towards justice, we can begin to bring some peace to you and to the memory of those you love.   It is with the deepest sense of responsibility that we will continue this work in partnership with all of you.“

I wish you courage and all the best on this important day and every day of your lives.  Thank you. 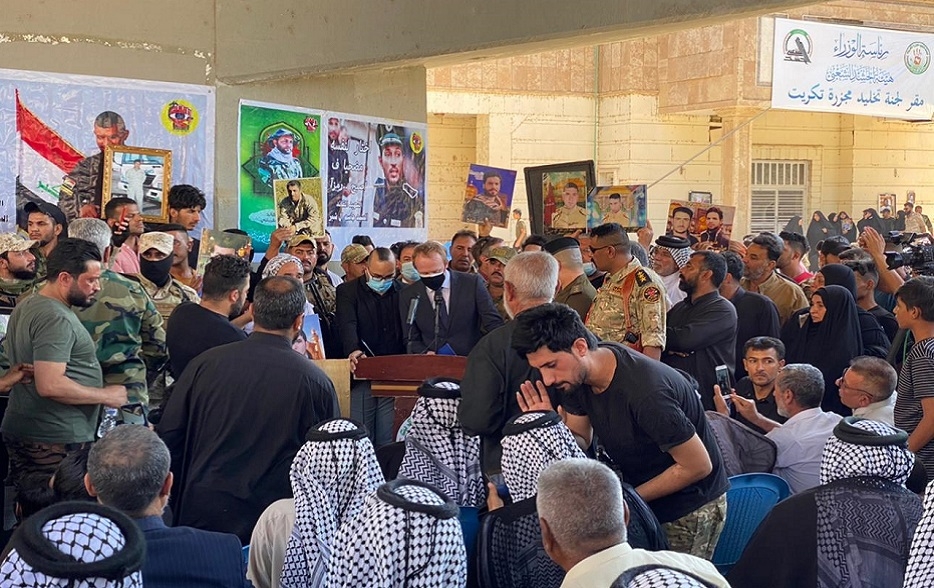