Increased Faith in the Path of Justice, Eight Years on ISIL Crimes against the Yazidi Community

Baghdad, 03 August 2022 –As we commemorate the 8th anniversary of ISIL crimes against the Yazidi community, we stand at the beginning of a new chapter that brings faith in the path of justice for victims and survivors; as an increased momentum for the prosecution of ISIL perpetrators for their international crimes, in particular the crime of genocide against the Yazidi community.

Since last year’s commemoration, we see progress in the form of legal precedents for prosecution for the crime of genocide in German courts, the opening, and excavations of additional mass graves of Yazidi ISIL victims in Qeni and Hardan, Sinjar; the completion of the second return of remains, while the work continues to identify the remains of more victims.

This momentum which Special Adviser and Head of UNITAD Christian Ritscher has stressed is inspired most of all by the courage and resilience of the Yazidi community in Iraq and in many places around the world. The courage and perseverance of Yazidi women and girls, in particular, has been exceptional and humbling. It is their determination for justice and accountability that drives these efforts, aiming to investigate all the crimes that ISIL perpetrators committed against the Yazidi community.

Special Adviser Christian Ritscher stressed: “I had the chance to meet with brilliant Yazidi youth on my latest visit to Sinjar in May of this year. I was truly inspired by the steadfastness and the persistence of those young women and men, who have survived unimaginable horror, to come forward and speak up about the gravity of the brutalities that befell them, as well as their trust and belief in the path of accountability and justice.” he also added that “the young women and men of the Yazidi community deserve to be recognized for what they have endured and continue to endure, yet their ability to rise, develop, and take their future into their own hands is genuinely impressive.”

The momentum towards justice and accountability will continue to increase through the unanimous support of the international community that stands strong behind the pursuit of accountability for ISIL crimes. The Government of Iraq as well as numerous member states have shown unwavering support to UNITAD’s investigations throughout the past year.

The fruits of this relentless work became visible in November 2021, with the first conviction of an Iraqi ISIL member for war crimes, crimes against humanity and genocide by the Higher Regional Court following a 19-month trial in Frankfurt, Germany. UNITAD supported German prosecutors by engaging with witnesses in Iraq and was able to help confirm the fraudulent documentation presented by the defendant.

This collaborative effort, as it continues to grow, will bring the victims and survivors closer to the justice they deserve. “Through partnerships across national authorities, UNITAD, impacted communities and non-governmental organizations, we can overcome the many hurdles faced in delivering justice for ISIL crimes” concluded Special Adviser Ritscher. 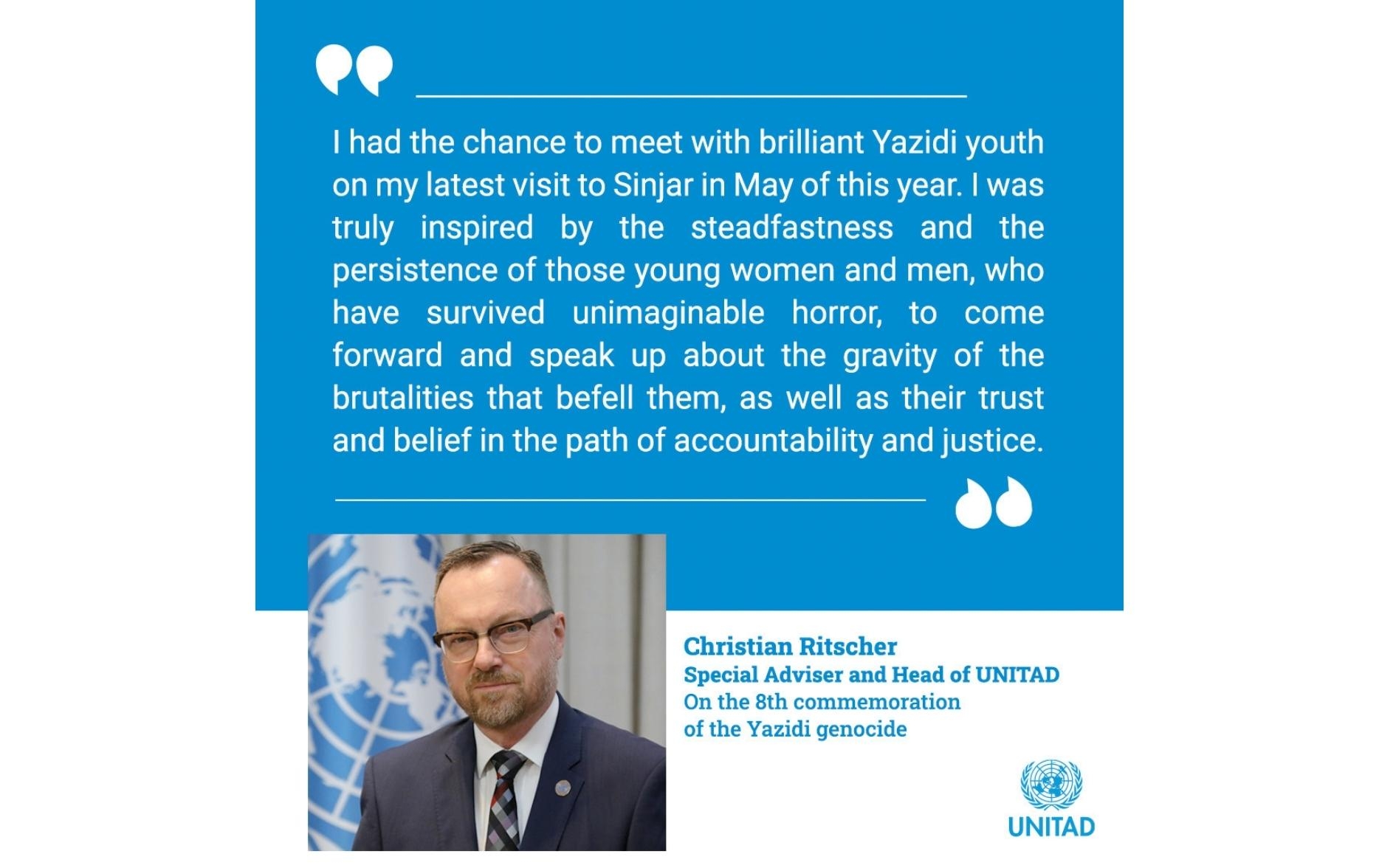