Developed in collaboration with SITU Research, a visual investigations practice, the video combines key assets from the diverse body of evidence collected by UNITAD, as well as the Iraqi authorities, to create a coherent narrative and spatial reconstruction of the sequence of events that unfolded. Satellite imagery, geospatial data, eyewitness testimony, and Da’esh/ISIL propaganda footage—filmed during the events by the perpetrators themselves—are synthesized to provide a detailed and exacting account of these grave crimes.

The publication of UNITAD’s video about the massacre comes after the release of the Team’s eighth report to the United Nations Security Council, and a Special Event on the massacre, organized at the UN Headquarters on 10 June 2022, during which the video was screened for the first time. The video is made public as part of UNITAD’s commitment to promote accountability for Da’esh crimes, and provides an opportunity for the wider public to learn about the scale and magnitude of these international crimes.

Special Adviser Ritscher also confirmed that “by completing a case brief on this massacre, the detailed evidence provided can be used to support prosecutions of ISIL members, some of whom are most responsible for those crimes.”

Brad Samuels, Director of SITU Research said that “this video assembles a range of evidentiary material to deliver a clear and coherent account of these horrific events. While the investigative work follows the highest standards of rigor, it is important that this work does not become clinical and abstract. It is only through the convergence of witness testimony and forensic documentation into visual production that the scope and scale of this event can be understood.”

In this context, SITU Research has developed a digital evidentiary platform used to manage, analyze, and present the associated multimedia, making it available to forums of accountability in Iraq, and all over the world.

The Tikrit Air Academy Massacre video is an extension of UNITAD’s broad effort to harness advanced technology and innovative methods for the Team’s investigations into crimes committed by Da’esh/ISIL. It is also a part of an initiative to present multimedia products detailing Da’esh/ISIL’s international crimes investigated by UNITAD. In May 2021, UNITAD released a similar multimedia presentation about the genocide committed against the Yazidi community in Kojo-Sinjar.

Special Adviser Ritscher noted that “there is a collective responsibility globally to ensure that the evidence collected is put before national courts to prosecute perpetrators. Criminal accountability is achieved only if those responsible are identified, tried, and convicted, and when victims’ voices are heard”. 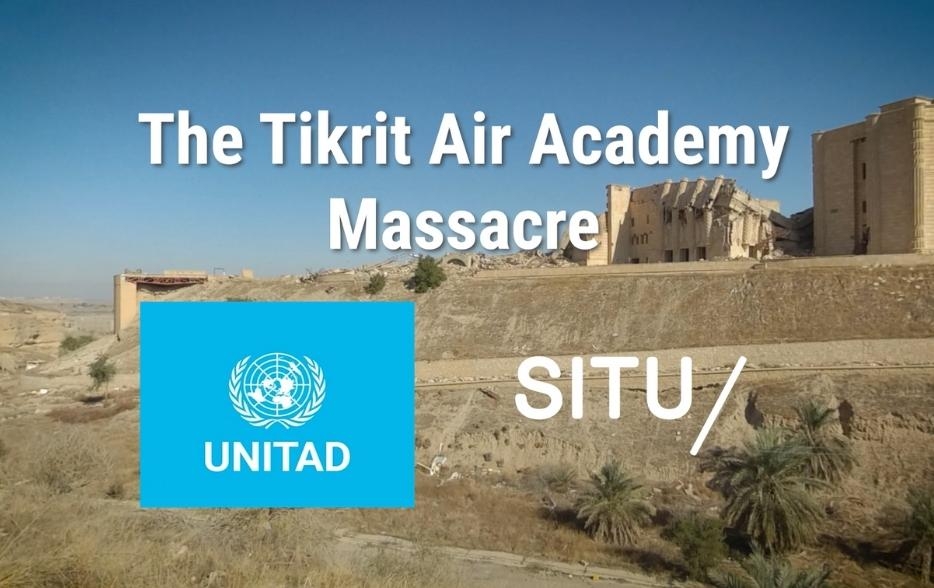